Why Are Some People Not Healed?

One of the biggest questions I receive in healing ministry is this: Why are some people not healed?

Sparks especially fly when I make inflammatory statements like the one I did yesterday: “If you place your hands on sick people and they don’t get well, then you have reason to question what you’re believing and find out what needs to change.” (See “Is It Biblical to Heal in Jesus’ Name?“)

A good friend of mine replied to that article with a very sensible concern:

Art, I really liked this article, but I disagree with this statement only: [quoted above]. Not everyone that we lay hands on gets healed…and you know that. I hope you did not mean that if the person is not healed that we Christians are doing something wrong or not believing…

Actually, that’s exactly what I mean!  In our carnal flesh, we love to dodge responsibility when things don’t work according to plan.  In the next several paragraphs, I’ll share the scriptures that prove it.

When physical healing started happening more and more often in the Church during the last century, people started explaining the tough cases by blaming the victim: “Come on!  You need to have more faith!”  There’s a problem with that, though.  When Jesus raised the dead, the dead person didn’t need to have any faith!  And if you think dead-raising is a different category from healing, what about people who are in comas or are unconscious?  Are they beyond the help of Jesus because they can’t believe for themselves?

While it is true that Jesus often said, “Your faith has healed you,” it is also true that this was only in about half of the miracles recorded in the Gospels.  Other times, it was the faith of others–like friends or family of the recipient.  But there are also cases where the responsibility rested solely upon the minister, as I’ll show you in a moment.

Eventually, someone with a little compassion realized that blaming the victim was cruel and unbiblical. But the carnal flesh–still wanting to save face–pointed the blame somewhere else.  Soon the most popular theory was that healing simply wasn’t God’s will in that situation.

There’s a problem with that too: Jesus proved otherwise!  Every single person who came to Jesus was healed:

Do you see the common thread?  Here are nine scriptures in which entire crowds of sick and tormented people were healed.  Never do we find even one passage in which Jesus said, “I’m sorry.  My Father is building character in you, so you’ll have to stay this way.”  Never do we hear Jesus say, “God doesn’t want to heal you today, so you’ll just have to keep suffering until He’s in a better mood.”

And yet these are the things we basically say to people when healing doesn’t happen. 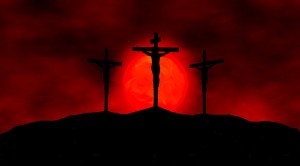 I find it fascinating that Christians become upset when I suggest that they’re the reason people aren’t healed; yet their consciences are not the least bit bothered by placing that blame on Almighty God.  Does anyone else see the problem?  We would rather blame God–who paid the ultimate price with the blood of His own Son–than take responsibility for our own commission.  We use holy-sounding words–calling it His “sovereignty.”  In reality, Jesus already expressed His sovereignty when He decisively placed healing ministry in the hands of the Church.

In Matthew 17:14-20, we find a scripture that proves what I’m saying.  A father brought his son to the disciples for healing, but nothing happened:

Matthew 17:14-16–When they came to the crowd, a man approached Jesus and knelt before him. “Lord, have mercy on my son,” he said. “He has seizures and is suffering greatly. He often falls into the fire or into the water. I brought him to your disciples, but they could not heal him.”

If this happened today, many Christians would sigh, frown, place a hand on the father’s shoulder, and console him, “The Lord works in mysterious ways, brother.  It appears that this is God’s will, and He is going to use it for His glory somehow.  Continue to trust Him until the end and remember that He loves you.”

Jesus didn’t do that.  He knew better.  Here was His response:

Matthew 17:17-18–“O unbelieving and perverse generation,” Jesus replied, “how long shall I stay with you? How long shall I put up with you? Bring the boy here to me.” Jesus rebuked the demon, and it came out of the boy, and he was healed from that moment.

Apparently, the disciples were doing something wrong.  Jesus didn’t have any problem working the healing.

Was it the boy’s fault that he hadn’t been healed?  Of course not.

Was it God’s fault?  Apparently not, because the boy was healed when he came to Jesus.

Was it the devil’s fault?  We’d like to say “yes” (because we like to pass blame), but the truth is that the devil is too puny and powerless to stop the true power of God.  He cannot thwart what God wants to do.

The only people left in the equation were the disciples.

Matthew 17:19-20–Then the disciples came to Jesus in private and asked, “Why couldn’t we drive it out?”

He replied, “Because you have so little faith. I tell you the truth, if you have faith as small as a mustard seed, you can say to this mountain, ‘Move from here to there’ and it will move. Nothing will be impossible for you.”

Jesus firmly placed the blame on the disciples’ lack of faith.  If that bothers you, don’t get on my case–take it up with Jesus!  Those were His words, not mine!

When Jesus said, “Nothing will be impossible for you,” He meant it.  But when WE read, “Nothing will be impossible for you,” we decide in our hearts what things are excluded.  We add conditions and stipulations to Scripture.  Jesus didn’t really mean NOTHING, we think.  In reality, we are twisting Jesus’ words to accommodate our own unbelief.  Lord, forgive us!

Now let’s make this personal.  On a monthly basis, I receive scores of requests for healing ministry.  I attempt to minister healing to hundreds of people each year.  I have collected many testimonies over the past year, including healing of deafness, blindness, tumors, asthma, neuropathy, hernia, paralysis, arthritis, degenerative disc disease, tendonitis, carpal tunnel, meningitis, and more.  The locations of these healings have ranged from churches to restaurants, stores, parking lots, camps, houses, hospitals, and even the bush of Africa.  I have seen that there is no limit to God’s power or presence.

Yet, as my friend pointed out, not everyone I lay hands on is healed. How do I deal with those situations?  Well, I certainly don’t blame the person.  And I don’t blame God–He has already done His part through the sacrifice of Jesus.  And I can’t blame the devil, because that would be giving him more credit than he deserves.  Instead, I look the person in the eye and apologize: “Clearly there’s something I’m missing.  I don’t know if it’s because I’m doubting or if I should have prayed and fasted recently, or if there’s something else; but what I do know is that Jesus paid the price for you.  Never stop seeking the healing, because Jesus deserves to receive what He paid for.”

Then I go home and ask the Holy Spirit to reveal to me what I should have done differently.  Many times, He shows me where I fell short.  Sometimes, the problem was that I doubted.  Sometimes I wasn’t maintaining the lifestyle of humility necessary to be able to carry the weight of such success.  Sometimes I was begging God, as though I had more compassion than Him–which is not faith at all.  The list goes on.

Sometimes I don’t receive any insight at all.  All I know is that if the person had been touched by Jesus, they would have been healed.  Instead, they were touched by me.  When people are healed at my command (in Jesus’ name), it’s only because God saw someone’s faith and looked past my human frailties to touch them.  When people are not healed at my command, it’s only because I’m not yet perfectly like Jesus.  If I were, then the person would have been healed because everyone who came to Him was healed.

Is it possible for anyone other than Jesus to see 100% success in healing ministry?  I have to say “Yes,” because anything is possible in Christ; and I am personally contending for so much of Christ’s nature in me that no scheme of the devil can stand in my presence.  I want that.

Until then, though, I believe there is a different way–and I would even call it a “better” way.  It’s called “The Body of Christ.”  Every time I’ve been in a meeting where every person was healed, it was because I wasn’t the only one ministering healing.  Rather, I trained the people for the work of the ministry and then made an opportunity for them to minister to each other in Jesus’ name.  Using this method, I’ve seen literally hundreds healed at a time! (To see it happen with 300 Kenyan school children, watch the video “Ordinary People Ministering Healing.”)

None of us is perfectly like Jesus–we’re just little pieces of His Body.  And when we come together, He is more fully revealed.  When multiple pieces of Jesus come together, He is more fully present than when there is only one piece.  “Where two or three gather, there am I in their midst.”  When my command of healing doesn’t work, I often turn the person over to someone else–sometimes a little child–and then it works!

In closing, consider this account of the first Church as they gathered together in public:

Acts 5:12,16—The apostles performed many miraculous signs and wonders among the people. And all the believers used to meet together in Solomon’s Colonnade….Crowds gathered also from the towns around Jerusalem, bringing their sick and those tormented by evil spirits, and all of them were healed.

Let’s stop making excuses and dodging our responsibility.  If we will own up to our commission and take responsibility for stewarding it well, I believe the Church will once again be known throughout the world for administering the healing power of God.  If healing ministry doesn’t work, don’t shrug it off as God’s will.  Rather, ask Him to reveal what needs to change in you so that you can better represent Him next time.  Ask what Jesus would have done differently, and then ask the Holy Spirit to make you more like Him.

Is it Biblical to Heal in Jesus’ Name? Creative Miracles – Can God Heal a Severed Limb?