Why Don’t Miracles Happen in America? …or Do They?? 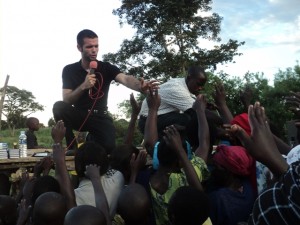 After seeing so many miracles in Uganda, I think the most common question I receive is this: Why do miracles seem to happen like this in other parts of the world while we don’t see them here in America?

To tell you the truth, I know where these people are coming from.  I’ve been in their shoes and asked the same questions.  But now, I can honestly say that miracles DO happen in America, just like in other nations around the world!

The Sunday after I returned from Uganda, my Pastor preached about physical healing and asked me to share some brief testimonies at the end of the service (You can listen to the podcast here).  I participated in the prayer time afterward; and to be frank, I was really wondering if my experiences in Uganda would translate to America.

Sure enough, the miracles started.

At each place where I’ve shared the testimonies from Uganda, I have seen more miracles.  People have come to salvation after seeing the videos and hearing the stories.  Many more healings have happened.

I just posted another video depicting ordinary Christians ministering healing–including 300 Kenyan children who had only received Christ about 5 minutes earlier.  At the meeting where this was filmed, I had the people minister healing to each other.  All I did was teach them how and then stand back.

I’m still receiving testimonies.  Three people with chronic neck or back problems were healed, and so was a young man whose ribcage used to be deformed!

Furthermore, I know of a few testimonies from people at that meeting who put their newfound faith and boldness into practice:

I recently led an evening of worship at a church in Dearborn, Michigan.  The Lord gave me a word of knowledge about a person who had pain in their right shoulder.  Sure enough, one woman raised her hand.  A couple people laid hands on her, and she was healed within seconds.  Before I left, a man approached me and said he was a bass player who had fractured two fingers on his left hand and couldn’t play.  Seconds later, Jesus had healed him as well.

I’ve even received two reports of people being healed while reading the articles on this web site!  Interestingly, both men had pain in their sides.  One of them had been through several rigorous medical tests to identify the problem.  The doctors’ hypothesis was liver or kidney.  But after the man was healed, he went to the doctors for the final tests, and they said there was absolutely nothing wrong with him!

(By the way, if you happen to receive healing while reading this article, please e-mail me!).

“Why don’t miracles happen in America the way they happen in other nations?”  I am convinced that this question is the fruit of seeds planted by demons.  Our experiences (or lack thereof) do not trump the Word of God. The borders of our country cannot stop the Kingdom of God.  And all the doubt in the world cannot stop the power of God.  There is no excuse for powerlessness in America.

I do admit, though, that people wouldn’t ask this question if they were seeing the same things I’ve been seeing as I travel.  Obviously, there is an issue or the question wouldn’t be raised.  In my observation, the reason Americans don’t see as many miracles probably stems from a few issues:

Knowledge puffs up, but love builds up.  I noticed something in Uganda: Many of the people seemed to love more than they knew.  In America, we tend to know more than we love.  We have become intellectual gluttons–feasting our minds on revelation and rarely doing anything useful with it.  We know how to prophesy.  We know how to evangelize.  We know how to worship and praise.  And we tend to be very cute and trendy when we do these things.

Miracles happen when people put their faith in Jesus Christ and trust His grace to be sufficient.  That can happen in any nation…even America.

Godly Order – Not What You Think! How to Have a Life of Miracles